Airbnb has been called out by regulators for exacerbating the New York housing crisis, as landlords have been found to push out their lower-income tenants in order to rent out the units on Airbnb. Source: Airbnb. 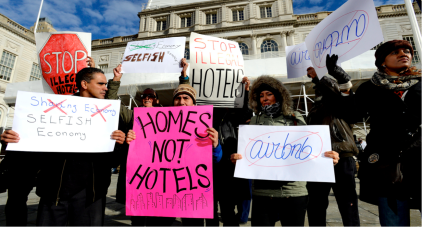 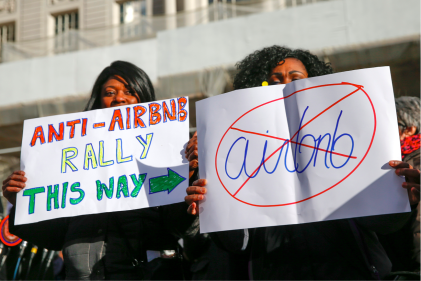 On October 21, just hours after Governor of New York State Andrew Cuomo signed legislation imposing hefty fines on those who post illegal short-term rentals online to Airbnb, the peer-to-peer online community marketplace company sued before the law went into effect, refuting the law for being unconstitutional and a violation of freedom of speech. This lawsuit is not unique, however, falling in line with those recently filed against San Francisco and Santa Monica, California, for similarly imposing laws to fine the company for listings published on its platform that the cities claimed were illegal.

The New York law makes it illegal to advertise rentals for entire homes or apartment units for less than 30 days on Airbnb. Hosts who break the rule could be fined anywhere between $1,000 to $7,500, while Airbnb itself could face penalties of up to $1,000 per violation.

Airbnb claims that the law violates the Communications Decency Act, which frees Internet companies of liability over content uploaded by their users. The company stated that the law would “hold Airbnb liable for the content of rental listings created and posted by third-parties on Airbnb’s platform” whereas the act states that “no provider or user of an interactive computer service shall be treated as the publisher or speaker of any information provided by another information content provider.” In its suit against the state’s attorney general and city mayor, Airbnb claimed that the law “is a content-based restriction on advertisements, in the form of rental listings, which are protected under the First Amendment.”

The company also states that it already advises its hosts and guests to be aware of and comply with local laws in listing and renting, as a disclaimer for the platform not being responsible if hosts are found to be violating laws. However, with this new law, Airbnb could potentially, without due process, be held liable for advertisements posted by illegal renters who might not even be aware they are breaking the law. Since Airbnb is simply the platform over which hosts and guests can connect, holding Airbnb liable for host posts and in turn making Airbnb screen each host for potential criminal violation would thus be unreasonably burdensome in the company’s eyes, a responsibility it should not have to take on as an open Internet platform.

As the largest rental market in the country, with 46,000 hosts who posted listings as of October 1 for New York, the city faces opinions from all its stakeholders. While supporters see Airbnb as a catalyst for entrepreneurship in providing efficiency and convenience to renters, others see it as a threat to safety, and a contributor to the skyrocketing of rents and the deterioration of communities. Regulators and advocates of affordable housing see Airbnb as providing an incentive for people to illegally rent out apartment units to short-term travelers. This in turn hurts the real estate market by taking units off the market for long-term residents and driving housing prices higher. Airbnb has been called out by regulators for exacerbating the New York housing crisis, as landlords have been found to push out their lower-income tenants in order to rent out the units on Airbnb. In a report published by the New York State Office of the Attorney General Eric T. Schneiderman investigating Airbnb’s impact on the city, nearly 72 percent of the listings for New York were found to be made in violation of the state’s law while Airbnb was estimated to collect $282 million from those short-term bookings. In addition, the report found that 37 percent of revenue generated by Airbnb hosts came from hosts who had over three or more listings. Though Airbnb has proposed putting a one property limit for hosts, regulators say the company needs do more to prevent illegal listings from being advertised.

Since its founding in 2008, Airbnb has struggled with rental regulations all over the world. Though the company has grown to help rent out over one million rooms in over 190 countries, it still faces battles when it comes to facing rentals laws that do not particularly address short-term accommodations in spaces meant for permanent residents. In seeking to grow its user base, Airbnb takes firm stances where it can it order to protect its hosts, in the hopes of increasing its rental offerings and helping middle-class citizens increase their income. However, with the discovery of more hosts renting short-term stays or hotel-like services in residential buildings, and facing pressure from other residents, New York city is increasingly cracking down on Airbnb postings that it considers illegal.

With its $30 billion valuation, Airbnb claims that its platform encourages tourism by offering rentals of unoccupied space at prices less than those charged by hotels, and allows homeowners the opportunity of additional revenue streams. As the company is also disputing legislation in Amsterdam and Barcelona, which also fines hosts who list illegal rentals, and in Berlin, which has outlawed most short-term rentals, the outcome of Airbnb’s New York battle has the potential of changing Airbnb’s overall business model. Either Airbnb needs to do more to monitor and eliminate listings that violate local laws, or face action from the government.