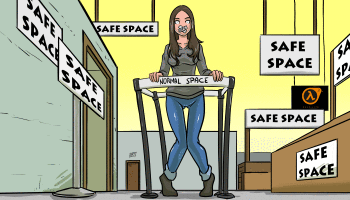 There are going to be people who will use this freedom to preach hate, or to present ideas we may find repulsive. But let’s not silence them; let’s instead listen to them, and in doing so debate their beliefs with our own, creating in turn a more unified and thoughtful college environment. The conversation should not end with just safe spaces and trigger warnings.

College—the Republican bread-and-butter for demonstrating how sensitive our generation has become to criticism of all sorts. Plenty of ‘right-wing’ journalists have been quick to bash concepts such as safe zones and trigger warnings, calling students “snowflakes” who are too fragile to handle the harsh truths of reality. Though this is obviously partisan exaggeration, we as college students do pride ourselves on our efforts to uplift and advocate on behalf of underrepresented groups within our student bodies. However, the further we strive to protect marginalized groups from hate and discrimination, the more one very fragile concept central to American identity suffers: free speech.

The ability to express one’s ideas without fear of judgement or persecution has always been a cornerstone of American ideology. Despite partisan history, there has always been a general agreement that although we may not agree with each other’s ideas, we maintain the rights to express these ideas freely. Our generation, however, has witnessed a significant shift away from this ideology, as we now value the protections of the individual over free expression. A close friend of mine once told me she was afraid to tell other students about her conservative values, out of fear of not only social judgement but also different treatment from her professors. This problem extends beyond just fellow students, as plenty of speakers at universities across the nation have found themselves heavily criticized, interrupted, and protested because of their political beliefs. Comedians who regularly performed on college campuses are now avoiding them, afraid of the potential backlash from even one off-color joke.

Now I’m not saying that we should stop protecting marginalized groups, as many of the actions universities have taken have been in the right direction. However, I do believe that we can uplift such groups while still protecting the opinions of others. College is a place for us to see new perspectives and question our own views of the world. There is a fundamental understanding that having thoughtful conversation about our ideas can often help us refine them, and perhaps ultimately propose better solutions or beliefs than those we had before. Science seems to suggests this as well, with a 2008 study in published in the International Review of Economics Education showing that students who receive pluralist—or diversified—Economics educations have better critical thinking, moral reasoning, and communication skills. Other studies, conversely, have shown that continuous exposure to biased sources and news can foster intolerance, antagonism, and ideological segregation. There is substantial evidence, thus, to support a case that exposure to a multitude of opinions increases overall societal awareness and discussion. It is impossible to have debate when one side of an argument—even for issues for which we believe to have a clear answer—is almost entirely silenced.

There are going to be people who will use this freedom to preach hate, or to present ideas we may find repulsive. But let’s not silence them; let’s instead listen to them, and in doing so debate their beliefs with our own, creating in turn a more unified and thoughtful college environment. The conversation should not end with just safe spaces and trigger warnings. We must continue to evaluate new perspectives and ideas in order to further societal progress as a whole. Silencing groups that may have hateful beliefs will do little to change their ideas and may actually have quite the opposite effect. It may lead them to believe that they are rejected by society, potentially isolating them from the social environments that are characteristic of colleges and preventing the interchange of ideas. This could ultimately contribute to the partisanship and divisiveness that now characterizes our country.

The partisanship that we see not just within the United States but across the world is unprecedented. Though it may sometimes appear easy—particularly in an area like New York City—to close ourselves off from those with different political views, we must incorporate them into our discussions if we want to build a truly inclusive and thoughtful community of fellow students.