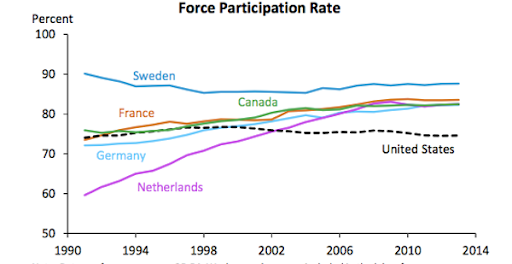 In the 1930s, Norway, Denmark, Iceland, Finland and Sweden—collectively known as the Nordic nations— experimented with their economies. Dubbed as the Nordic model, these countries created a modern welfare state focused on social democracy and competitive business, which evolved to include a commitment to female workers.

Compared to the United States, Nordic countries exhibit a higher share of female workers. The workforce of all five countries are made up of more than 47% women, while the United States has only 45.8% Sweden leads the pack at a female labor force participation rate of just under 90%. In contrast, the percentage of working women in the US has declined, possibly due to the lack of public  support services.

Behind the female worker rates lays quality, accessible, and affordable childcare. Combining this with parental leave policies that allow new parents to take 20-35 weeks of paid leave split before and after childbirth, these nations have created a sustainable childcare system that leads to more women in the workforce. These policies apply to all parents regardless of their personal relationship.

The United States in comparison, does not guarantee any parental leave. According to WPR, most companies provide 6 weeks or less of paid maternity leave and no paternity leave at all. Added Professor Foudy, “If we were more generous in daycare and paid family leave support, we would have a higher female participation rate.” A report by S&P stated that “If women entered and stayed in the workforce at the same rate as they did in Norway, the U.S. economy would be $1.6 trillion larger than it is today”.

The US would benefit greatly by bringing and keeping women in its workforce, especially in higher positions. Professor Foudy agrees that “in many cases, the cost of these policies would be far less than the added GDP growth, or even tax revenues, they create.” In Nordic countries, more women in the workforce has been one of the factors that have contributed to more economic equality and thus, low poverty and crime rates. If the US were to adopt these policies, “it would be a more just, but also richer, society.” In Nordic nations, citizens accept high taxes because they believe that everyone should have quality social services.

Although not every aspect of the Nordic model can be applied to larger, more diverse countries like the US, their treatment of women, if adopted, would likely lead to a safer and more prosperous nation. Other core aspects of the Nordic model include the public provision of social services funded by taxes; investment in education and training, childcare and other services associated with human capital; and strong labor force protections through unions and through the social safety net. Of course, these countries require high tax rates to pay for these facilities, but as Professor Joseph Foudy explains, “the countries have a high level of social solidarity, so workers don’t mind paying higher taxes to ensure a good living for the poorer people.”