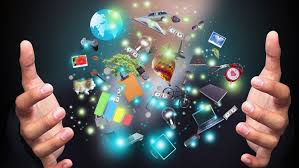 Disruptive technologies displace established innovations and transform the entire market, or a product with the potential to upstart a new industry. Take Netflix for instance. The content giant utilized the emerging streaming technology, disrupted the DVD industry by targeting Blockbuster’s overlooked segments, and offered a new level of affordability and convenience, which ultimately made Blockbuster obsolete. Such technologies prove critical because they impact all aspects of our lives and society as a whole.

So we ask the question —“What does our future hold?” Below we take a look at the five highly-influential disruptive technologies shaping the world of tomorrow.

The era of 5G will enhance connectivity across networks by increasing data transfer speeds tenfold, relative to 4G. Due to 5G’s low latency attribute, movie downloads that normally require ten minutes will now take mere seconds. Estimates hold that 5G connectivity will save individuals roughly 23 hours of loading time for browsing social media, gaming, streaming music, and downloading videos. Additionally, 5G will introduce new channels for content producers to connect with consumers. According to a study conducted by consulting firm Ovum, the global media industry is poised to gain $765 billion in cumulative revenue from new services and applications catalyzed by 5G connectivity.

In the 1980s, the invention of a gene-editing process enabled researchers to alter the DNA of certain organisms. This process was inherently long, costly, and slow. The CRISPR system is a powerful protein-based gene-editing technique, adapted from a naturally occurring genome editing system in bacteria and eukaryotes. Today, CRISPR represents a massive leap forward in gene-editing, increasing speed, lowering difficulties, and reducing costs. CRISPR is uniquely disruptive for the biotechnology industries it has widely commercialized the process, increasing the availability and affordability of gene-editing. Director of Rosential Basic Medical Sciences Research Center James Haber commented, “[CRISPR] effectively democratized the technology so that everyone is using it. It’s a huge revolution.” Through this innovation, researchers are modifying crops to increase yields, engineering treatments to dangerous diseases, and developing advanced cancer treatments, with even more to come. Patents with CRISPR and funding for companies with CRISPR have accumulated massive fundings, pointing to its high potential. Recently, CRISPR has propelled breakthroughs—the first U.S. Cancer patients were treated using CRISPR in late April of this year.

LIDAR, which stands for Light Detection and Ranging, is a remote sensing method that utilizes light as a pulsed laser to measure ranges and variable distances to Earth. LIDAR instruments are primarily composed of lasers, scanners, and specialized GPS receivers. LIDAR projects a laser beam and records its travel time to determine the distance of items. Ultimately, LIDAR has allowed for increased efficiency in mapping larger areas and sending back thousands of detailed data points. The new technology has contributed greatly to the availability of high quality maps such as Google Maps. Additionally, LIDAR technology has been crucial to the development of driverless vehicles. As of last year, MIT developed “LIDAR on a chip” that is positioned to disrupt 3D scanning on various levels.

Autonomous vehicles are also positioned for immense disruption—many view driverless vehicles as the catalyst for a third transportation phenomenon—revolutionizing almost everything from the traditional ways roads are structured to attributes of the whole industry. In effect, autonomous vehicles have been predicted to antiquate traditional road infrastructure, vehicles, and other related services. It enables large volume of transportation for commercial, delivery, and miscellaneous services to be done during off-peak nights, reducing traffic jams. Autonomous vehicles have also been predicted to support the growth of new modes of transportation, and reduce the need for both cars-for-hire and taxis, all the while incentivising the development of new business models.

Generative Adversarial Networks (GANs) are deep neural net architectures consisting of two nets, one pitted against the other. One neural network, known as the generator, generates new data instances. On the other hand, the complementary network, known as the discriminator, evaluates them for authenticity. GANs hold an instrumental potential use-case since their unique cross-adversarial functionality creates a ‘Min-Max-game’ that enables the architecture to mimic any distribution of data. The generator strives to minimize the success value of the discriminator, while the discriminator strives to maximize the value of the data points. Through this, they can be taught to create and implicate worlds eerily similar to the world we live in – be it music, speech, images, or prose. GANs are especially disruptive because they have made strides in the way they conceptualize abstract elements, highly resemblant of the way the human mind does. GAN’s strong conceptualization capabilities enable them to deduce human truths about our world through inference. For instance, GAN has created fake, yet realistic world images of buildings without understanding not to place building foundations in the sky.

Clearly, with the ever-accelerating pace of human innovation, our future is unknown. We can expect to see multitudes more disruptive technologies emerging and radically transforming the way we live, work, and interact in the future. Remaining aware of disruptive technologies and the ways they will take root can be beneficial in understanding how we will create and protect value in the future.