Cryptocurrencies and blockchain technology have increasingly received mainstream news coverage, with trends such as meme finance (especially cryptos such as Dogecoin), decentralized finance applications, and most recently, non-fungible tokens (NFTs), powering blockchain’s rise. Fungibility refers to tokens or items that are replaceable by identical items (for example, a penny has the same value as any other penny), while non-fungible tokens are unique, irreplaceable items that utilize blockchain technology to programmatically ensure their uniqueness. Due to a greater sense of ownership and “clout” that NFTs bestow on buyers, they initially found popularity in digital art, with the most expensive NFT being a print by graphic designer Beeple, which sold for $69 million in a Christie’s auction this March.

NFTs have also recently seen interest from gaming companies, enabling the establishment of in-game economies powered by crypto tokens. These economies have yielded benefits for developers as well as investors, users, and NFT creators. By providing value for the entire gaming ecosystem, some blockchain games have seen rapid growth, leading to further interest from and large-scale partnerships with large companies and brands.

NFTs serve as digital items with various purposes in games. For example, in Decentraland, a Minecraft-style building game, players can purchase land parcels that the developers have coded as NFTs. These land NFTs can be purchased and sold in Decentraland’s in-game marketplace with the crypto token MANA. Whereas Decentraland and other games often issue fees on transactions, games can also make money by offering cryptocurrencies on exchanges, similar to how companies raise money by issuing shares.

However, NFTs and in-game marketplaces also enable users to make money through what the blockchain gaming community calls the “play-to-earn” model. Axie Infinity, a Pokemon-inspired game where players purchase a team of monsters called “Axies” and battle other players, has grown rapidly over the 12 months it has been available for public play, seeing nearly 2 million daily active users. Moreover, the game’s AXS token has seen a 420% increase year-to-date. Axie Infinity’s marketplace allows users to sell their Axie NFTs and other items, while also earning rewards for winning tournaments. AXS is listed on crypto exchanges, meaning it is convertible to USD and other fiat currencies, enabling users to utilize the game’s play-to-earn model as an actual source of income. In fact, many people in countries such as the Philippines have turned to the game due to job instability stemming from the pandemic.

Virtual economies already exist, but blockchain and NFTs provide value for the entire gaming ecosystem, including developers, players, and third-party NFT creators. Current in-game economies, such as Fortnite with its V-Bucks, do not enable players to trade items outside of the game or convert them to fiat money, but with NFT marketplaces like OpenSea, players can even trade items across different blockchain games. As marketplaces grow, the virtual goods market will continue to expand with a projected market’s value of $190 billion by 2025 (see Fig 1. below).

These virtual economies give rise to the Metaverse, an immersive, fully online world that simulates real-world experiences. Companies have increasingly turned to metaverse-enabling technologies, such as AR/VR, and Facebook announced in October that it has changed its name to Meta to focus more on metaverse technologies and connective experiences. 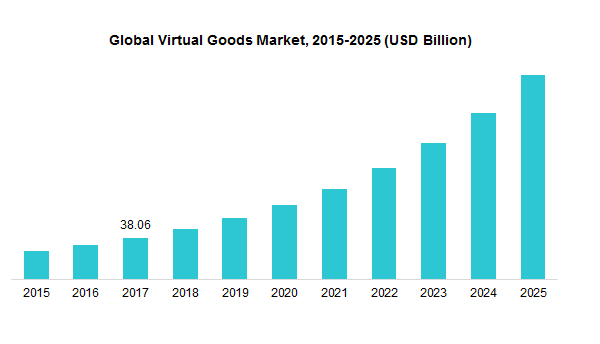 Facebook has already tried entering the crypto world by leading the Diem Association (which also includes Uber, Lyft, Spotify, Coinbase, etc.), though no crypto token offerings have materialized as of yet. But with success stories like Axie Infinity, more companies may seek to enter the blockchain and NFT space to play their part in redefining in-game economies. Giants in tech, such as EA, Google, and Amazon, have already entered the gaming industry through cloud gaming services, looking to capitalize on a rapidly growing trend. With blockchain gaming’s high projected growth and increasing popularity of blockchain-related applications, it may be only a matter of time till large-scale gaming and technology companies provide their own NFT-powered games.